Lindsay delivers an inspired roots-rocking record that is filled with confidence and inspired performances.  His veteran band and some of New York’s finest musicians burn through 10 songs in his trademark concept format. With his lyrical craftsmanship, he transports the listener to places and times with clarity, bringing a renewed sense of hope and purpose to a world...that is long over-due for  Revival.

Lindsay’s first record The Crossing (2005) featured the single “Eastside of the River” that charted for eleven straight weeks. It was added to over 45 Triple-A format radio stations nationally and was played and critiqued globally. The success from “The Crossing” helped secure an invitation to perform on the coveted OnStage Concert Series recorded and broadcast from Rochester’s PBS affiliate, WXXI TV which resulted in a live DVD release.

His second album release, Esperanza (2009) built on that success and was added to more than 60 Triple-A format stations. The song “King of the Mountain” held the #1 spot at commercial station WOCM 98.1 (Ocean City, MD) for two straight weeks. Brian’s "King of the Mountain" was selected for ESPN's NASCAR Now national broadcast.

The 3rd record, The Monkey, The Tango and the Boogaloo (2014) was added to over 50 Triple-A Radio stations across the US, featuring the first focus track, “Heart and Soul”.

The Brian Lindsay Band has shared the stage with The Smithereens, Southside Johnny and the Asbury Jukes, Shooter Jennings, Donna the Buffalo, Poppa Chubby, The Outlaws and The Little River Band to name a few.

BLB back to rock the coolest record store in the land!

Brian Lindsay Band back to rock Bside in Fairport!

BLB back to rock one of our favorite venues in Fairport, NY! 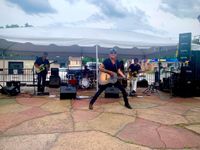 BLB make their debut at this gem of a place in Fairport, NY!

Also connect with Brian via